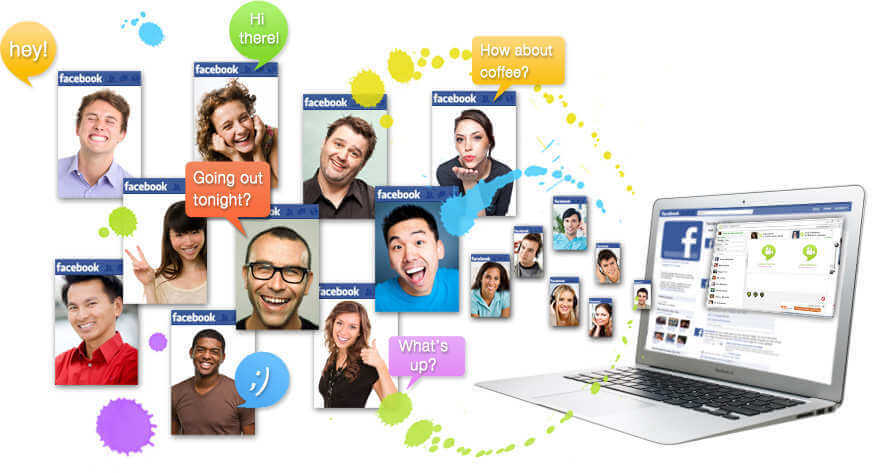 The Ultimate Guide To Pick Up Women On Facebook

In the modern era our lives have been saturated by plenty of social networking sites. All of them with millions and even billions of followers and users, one such site is Facebook. I often think if there are so many people out there on Facebook then why not use this to pick up women on Facebook, hence i am writing this Ultimate guide for you on how to pickup women on Facebook. Hold tight as you’re in for a long ride.

Facebook is the world’s most popular social networking service with more than 1.2
billion active users (if Facebook were a country, it would be the third largest
country in the world only behind China and India). 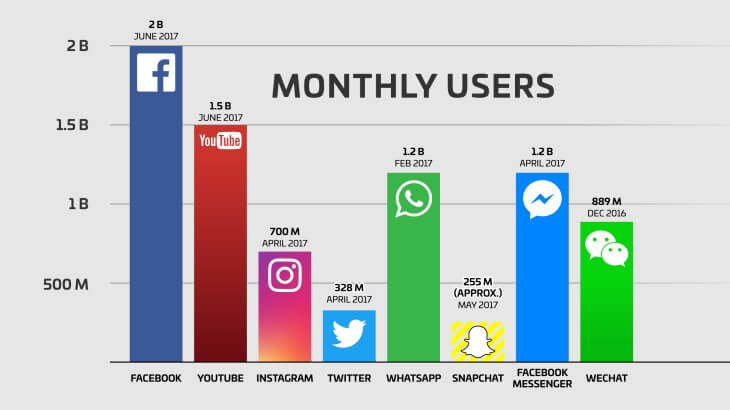 What is truly remarkable is that unlike most websites that people only visit
fleetingly, according to an agency, the average user visits Facebook four times a
day and spends 19.5 minutes a day on the site!

Facebook was launched to the wider public on September 26, 2006.Since its launch
Facebook has never looked back and now it’s time for you to never look back while
picking up girls on Facebook.

The quality of women on Facebook is staggering.There is definitely not a shortage
of gorgeous, sexy, beautiful women out there ready to be approached in the digital
world, but the sad truth is …only 1% of guys out there REALLY know how to do this…

And i promise you after understanding this article fully and instinctually you’ll
also become a part of the 1%.

1). The quality of women on Facebook is much higher. High quality women always use
these types of websites for networking,connecting with family and friends and to
socialize. Plus Facebook is a very user-friendly website with the ability to anti-spam
or block people who disturb you.

2). It’s a pretty clear way to get a nice clean line of communication with your
target.You don’t have to worry about interruptions, jealous boyfriends,“obstacles”,cockblocks, having a wing, isolation or embarrassments.

3). If you hate clubbing, or just simply suffer from too much approach anxiety,
online attraction can be a very real alternative.

4). You can have a complete personality makeover and portray yourself as whatever
you wish to be [although i would advice against it in the long run.]

>> Setting up your profile

Having attractive profile is everything on Facebook.It’s your first and last
impression or your make and break deal.It speaks volumes about who you are and
what you’re about.

If you don’t have an attractive profile,you will not receive any messages from quality
women.And trust me no matter how good you’re at texting and conversations,if she’s
not attracted to you,you can’t get her.

And almost 95% of men get their profiles wrong and hope that they would get the women that they want.

The first thing that women look at men is what they have posted on their photos.

Is it visually appealing or dull and boring.

I prefer especially pictures that you take with beautiful women in any social setting.

This makes you approachable and likable.

Always think of your Facebook profile as a business website.You must keep it engaged and keep spicing it up.

You must be highly sociable for people to want to be approached by you.

>> The Types of Pictures

Put a picture of you standing in front of an interesting place , where everyone one
wants to visit. Ex – Taj Mahal, Eiffel Tower, or anything which is beautiful and
captures the eye.

This picture must convey excitement and if possible adrenaline.

I don’t care how you do it, just do it. Walk up straight to women and ask them to have pictures with you or give them some incentives to click with you.

I don’t care how,just do it, and then the results my friend will be mind blowing.

It’s scientifically proven that women want men who are desired and wanted.

And you in a pic with a hot chick will convey that and so much more beyond your
wildest dreams.

Another good way to show your approachability and likability is to show everyone
through your pics that you’re highly approachable and sociable. 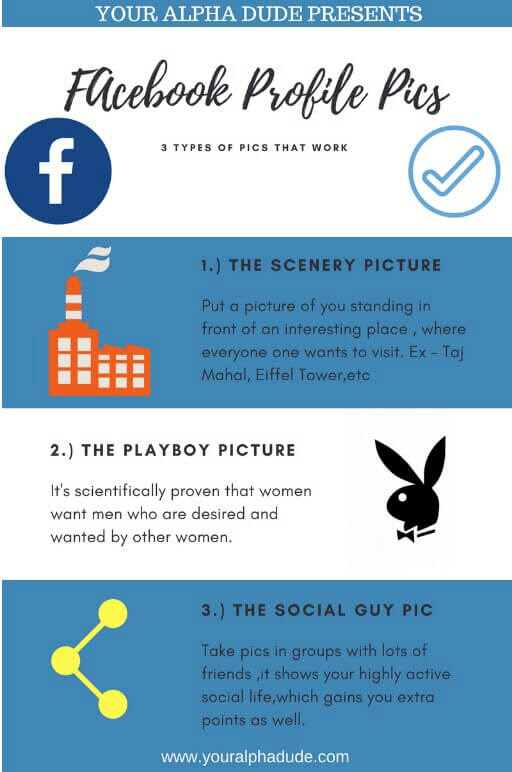 >> Don’t Do These Things With The Photo –

Never post lonely photographs as it conveys the message that you’re lonely
and that you spend way too much time in boring and dull things.

A girl only wants to hang around funny and interesting guys.They want to have fun
and have a good time. So, try to convey those things in your photograph.

Don’t put pictures of your torso.Or don’t show too much body.As women automatically
assume that you have a fake pic. You can put those things in your album.

Try and avoid those pics where your photos can’t be seen clearly.Or where your
photos are blurred. This creates a highly negative impact.

This is probably the second most important thing on Facebook after your picture.

Almost all women decide if you’re their type or not depending on the posts in your
wall and how many people are connecting with you or not.

You need to regularly post on other people’s wall so they’re compelled to post
something on your profile as well.It’s important so i just you don’t take it
lightly.

Just think of yourself as a young hot woman who was just approached by a guy on
Facebook , now she checks out his profile and finds out that his Facebook Wall
is almost empty.What would she think about this? CREEPY. JERK. Or something around that vicinity.

If you have a highly active facebook wall it shows your popularity and approachability. 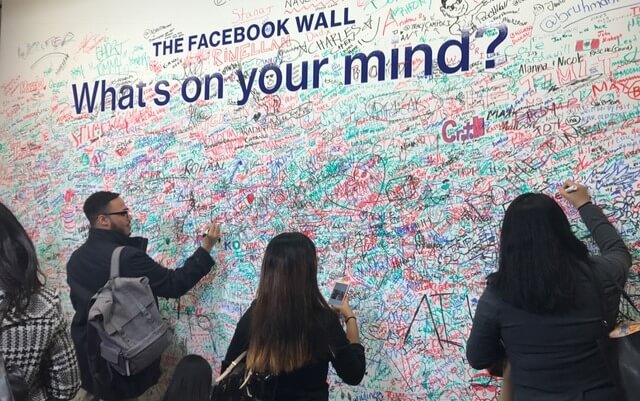 As i have discussed earlier, you need to treat your Facebook profile as if it’s your
website.

Social proof can be thought of as respect and admiration from everyone around you.

In the Facebook community as in any other social community—online or offline—achieving and maintaining as high a social status as possible is the name of the game.

This is particularly true when seeking to intrigue women, generate attraction and keep to their attention. There’s nothing like social proof when it comes to sending the
message women that you are a man who deserves a high quality woman.

Basically, social proof causes women to see you as a “great catch” who meets,if not
exceeds,her high standards.When a woman views you as a high status male,she tends to feel compelled to compete for your attention rather than to keep you at arm’s length, as she does to men with lower perceived social status.

And your No.1 job when it comes to achieving social proof on Facebook is to draw
“followers”, likes and comments on your posts and profile.

You can do it in a lot of ways…such as use facebook status and post interesting
humorous status,make group and make it interesting and add people into it,hire
some social media experts to grow your profile or you can use facebook ads to
self-promote yourself.

You have the killer profile setup.You have amazing visualising pics.You got an active
Facebook wall. You have tons of friends and followers who likes you and comments
on you.Now,it’s time to attack.

Now, at long last, you’ve completed the process of positioning yourself for maximum
success at attracting and meeting women through Facebook

Now if and when you see a woman who interests you, having discovered her through
facebook.

The first move you should make is to check out her profile. Do not send her a request
just yet.

Instead, note the nature and tone of her “Facebook wall”. What does she seem like
as a person? Is she coming off as the kind of person you could get along with?

Is she showing every indication that her sexual orientation matches yours?

And perhaps most importantly, is she even active on Facebook?

If all these prerequisites pan out, then you’ve got a great chance to start a
conversation.

Now, first you message her, don’t send her a request just yet.

For starters, resist the urge to use “pickup lines”.

Don’t be needy, clingy or even close to “hitting on her” for now.

If you can be witty, funny or charming without being insulting or creepy, go for it.

First of all, i would suggest that you give her a brief intro,like in normal life
and ask her for friendship.

If she agrees,try to become friends and spark attraction slowly.

Comment on her pics, likes on them and generally compliment her.
[for texting tips, read my article here]

And don’t be available all the time.

When a woman sees that a certain guy is messaging her in a confident manner that
is free of perceived “hidden agendas”, she’ll be MUCH more likely to respond.

I discussed with you about Facebook and how you can pick up women on it.

I made it clear that you need to have a good profile picture, active facebook wall
and you need to send good happy vibes to everyone. You need to build social proof
and then the game is ON.