Welcome to the third post in the Interview series on Your Alpha Dude. Where I, Your Alpha Dude will be interviewing Kezia Noble. The world’s leading female dating expert for men.

In this Interview series we will be discovering some of the dating secrets for men by Kezia Noble. We’ll also discover about her game, seduction and pick-up for you to take benefit from. 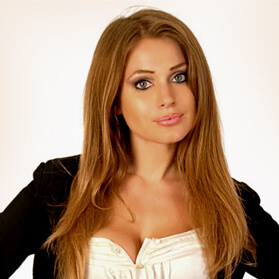 Kezia Noble is a celebrity dating coach. She is the world’s leading female dating expert for men and her tough love methods have earned a reputation for being ‘The Bitch With A Heart’.

Kezia has helped over 100,000 men to overcome a multitude of sticking points and limiting beliefs, and open their eyes to the skills, techniques, insights and secrets to attract women.

Note: This page contains affiliate links. If you purchase a product through one of them, I will receive a commission (at no additional cost to you). I only ever endorse products that I have personally used and benefited from personally. Thank you for your support!

And I don’t want you to wait anymore, so let’s jump into the interview.

1). What’s your thought on nice guys and what’s the number 1 thing they should do to start getting women?

The nice guy is a nervous and uncertain version of themselves. In reality, there’s no such person as the ‘nice guy’ it’s just a bland and forgettable persona that men take on when they feel unsure or nervous.

By unapologetically conveying the strength of your character, and sharing your reality in a format that isn’t peppered with uncertainty, nervous laughs and unnecessary apologising, you will be far less likely to come across as just another ‘nice’ but ‘forgettable’ guy.

Awkwardness can feel difficult to get rid of, because it spirals when someone is under pressure, but the more you talk to women, the more comfortable you will start to feel, and the more you force yourself to stop apologising, the more you will get used to expressing yourself with confidence and certainty.

2). Online Dating is getting hotter everyday. But can average men find their woman online? How?

A lot of people are starting to feel disenchanted with the whole online dating. This could be because of people not looking like their profile photos, or people not conveying the same level of confidence and self assurance like they do online. It’s important to remember that online dating should be seen as an extra option to meet women, rather than the only option.

Remember to make sure your photos are high in quality rather than high in quantity, and that those photos and your profile information don’t make you come across as lonely, generic or weird. Eccentric is fine, but it can be hard to express online without coming across as strange.

Make sure you’re opening message isn’t needy, which means avoid telling her how hot she is, or how she must be inundated with messages from men. Also, remember to keep the conversation two ways. She won’t want to go on a date with you, if all you’ve done is ask her a series of questions without revealing anything interesting about yourself.

3). A lot of guys find it hard to start a conversation with women. Is there anything they can do to solve this problem?

People tend to react negatively to the idea of having ‘stock in trade’ lines, but if you’re a guy who (like most guys) struggles with the transition between the opening line and having a full blown conversation, then having some ‘back up’ questions and responders that will make impact and encourage her to invest in the interaction will really help you.

An example would be; asking a girl where she’s from. Let’s say she replies that she’s from Spain. Rather than responding with the same old boring questions that everyone asks (which will just put her into autopilot mode) It would be much more impactful if were to say:  “You know. I’ve never been there, tell me two things that make it an amazing place to visit”  This will break the pattern, and serve to generate multiple conversation threads. A simple tweak like this can make a big difference.

It’s an example of a stock in trade line that you can use instead of just going silent or saying the same thing the guy who spoke to her just before you said. Of course there are hundreds of stock in trade lines you can choose from.

⇒ I’ve personally been a fan of her programs especially this one.

The 10 Hook Lead System. The program is completely designed to master the art of conversation. It has even got a whole mind-map to make sure that you completely internalize this course and master your conversations with women. Trust me this is going to be the real game changer.

( Click here to go to my recommended page and get this program.)

4). Your Attraction to Seduction course is one of the best selling online courses. What are some of its core strategies according to you which makes it so successful for men who have tried it?

The Attraction To Seduction program explains how to use both verbal and non-verbal seduction techniques. Because of our ever increasing over reliance on online communication, we are all losing the powerful art of flirting and seduction. People are now either too nervous to attempt it or just don’t have a clue, and as a consequence, they end up getting stuck in the friend zone.

The upside-down triangle that I share in the program is perhaps the most powerful no-verbal techniques that I’ve shared so far. Essentially this is a technique that sexually escalates the vibe of the interaction without saying anything specific. It arouses but it also acts as a good way to indicate if she’s interested in taking things further or not.

⇒ When I personally watched this course I was mind blown from the start especially when she teaches an insane method to break rapport with women and get them into a limbo.

( Click here to get her program Attraction to Seduction. )

5). And my final question, What’s the most important thing that you have learned from game and pick-up in all these years?

Before I became a dating and attraction coach for men back in 2006, I believed that creating attraction with someone was near impossible if the chemistry just wasn’t there. If someone had made up their mind that they weren’t interested in someone else then that person  just had to accept it and move on.

I soon learned that by making small but significant changes to our responses, body language, vocal tonality, eye contact, questions and story telling can create significant shifts in someone’s initial perception of us.

Game is essentially a way to completely reframe situations and thought processes in order to get the desired outcome.

The 2 key components of successful game is :

2). The ability to change a negative into a positive.

And in my opinion, nearly every single aspect of game is governed by one of these components.

And if you’d like to learn more about Kezia Noble and her unbiased tips for men who want to increase their success rate with women, I warmly recommend you to checkout her website at Kezia Noble.

You can also check her new instagram account for updates about  “A Piece Of The Attraction”, her podcast in which she exposes the truth about what women really want, and how to give it to them.