Become a Sex God With These 3 Easy, “Addictive” Bedroom Moves…

By far one of the easiest ways to seem more “Alpha” to women is to be more dominant in bed.

Especially if you’re naturally a little more “introverted” or “reserved,” women will be looking for at least one area where you can show her you’re confident and assertive.

Also many women naturally prefer to be submissive in bed… and secretly want to get dominated by a dominant, “Alpha” guy.

It’s why books and movies like 50 Shades of Gray did so well–they tapped into this subconscious desire of many women to just “let go” and be dominated during sex.

But when you do this the right way… you can get near-total control over her thoughts… desires… and fantasies.

She’ll think about you constantly… and her biggest worry in life will be that you’ll stop responding to her texts.

So if that sounds good to you… just use the 3 simple sex moves below… and she’ll soon be 100% yours… mind, body, and soul.

(What you do once this happens is up to you. Keep her around as long as you want… make her a part of your “harem”… or maybe she’s worthy of being something a little more long-term. The decision is 100% up to you).

1) Push Her Up Against the Wall & Kiss Her

A while back, I had a girl over at my place. We had eaten dinner… had some drinks… and the conversation was going great.

So standing in my kitchen, I just decided I wanted to kiss her.

Nothing dries out a hot girl’s panties faster than that.

No, instead, I grabbed her firmly behind the neck…

Pushed her back against the wall…

And started making out with her.

Afterward, she could not stop talking about how “that was such a turn-on when you just ‘went for it’ back in the kitchen.”

I asked her what she meant. Apparently a lot of guys are way too timid when it comes to “making a move” with a girl.

Then a lot of times, women are just looking for a guy who “goes for it.”

It’s the easiest way I know to initiate sex for the first time, too.

2) Pin Her Legs Back During Sex

Start in normal “missionary” position. You on top, her on bottom.

Lift one of her legs up in the air. Most women really like this (more on that in a minute).

Take your shoulder and push her leg forward with it as you keep thrusting in.

Many women will go wild with this–it’s a different sensation than most guys give them during sex.

And it’s a very “dominant” move too–it shows the woman you’re with that you’re in charge… and you’re going to get yourself off AND make them come, damnit!

(Women love when a guy takes charge like this).

Of course, the reason this works so well? Very strongly related to point #3:

You’ve probably heard of women who “only like big dicks.”

But when a woman says this… she’s actually lying to you.

What she means is “she likes the spots inside her that guys with big dicks can hit.”

The most important one of these spots is called her “A Spot” or “Deep Spot.” 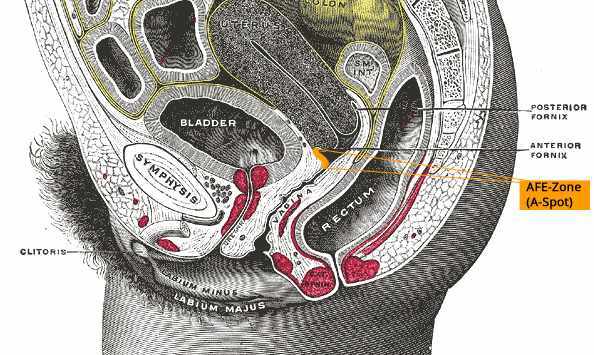 When a guy hits a girl’s deep “A-Spot,” it’s unlike any other kind of orgasm a woman’s experienced in the past.

Here’s what one woman on Vice says it feels like:

““I began to realize how moist I would become in certain positions when my partner was deep. The increase in wetness would also come with a warm, calming, euphoric feeling across my body, and I noticed that it would happen with deep penetration near my cervix… I knew this wasn’t something that was commonly experienced or discussed, so I began to do research.”

Another woman in the same Vice piece says:

““I’ve had partners think it was my G-spot, even after I kept telling them ‘Deeper, please!’” [1]

Many women enjoy the deep, powerful, “stacked” orgasms that hitting the A-Spot/”Deep Spot” can give her.

Once you can reliably hit a woman’s A-Spot / “Deep Spot”… it’s pretty much “Game Over” for her.

She probably hasn’t felt a “Deep Spot” orgasm before… and even if she has, it’s probably been with a guy who’s stumbled into it because he had a huge dong.

So if you can hit a woman’s A-Spot easily and repeatedly… and give her these powerful, multiple orgasms…

She’s basically yours as long as you want.

Until now though, it’s been tough for guys to reliably hit a woman’s A-Spot.

After all, it’s about 6 inches inside of a woman… and the average guy is only 5.57 inches long according to a nationwide study.

So what’s the solution?

How to Reliably Hit Her “Deep Spot” During Sex EVERY Time…

Make the most out of your penis.

But when scientists analyzed the plants and how they were prepared… they were shocked at what they found.

There were all kinds of bloodflow-boosting natural chemicals and compounds in this exotic “Firmness Formula” Dave ate.

And because bloodflow determines how full and thick your d!ck gets when aroused…

It’s the surest way possible to get a bigger-feeling d!ck that hits girls right in the ol’ “A-Spot” every time you bang them.

This “Firmness Formula” is game-changing for you–it’ll make the most out of what you have down-there… and it’ll let you hit girls’ A-Spots like a footlong-dildo.

So check out this video I saw that turned me on to it–Dave and a couple of his hot co-stars reveal everything: