How to Attract Younger Women.

They have a radiance and a magic that is hard to put into words.

But it’s a challenge for any men (let alone those who are advanced in years) to determine a younger woman’s true intentions.

Actually, men of all ages struggle to learn how to tell if a woman is interested in them.

Incorrectly assume a woman wants you, and you could get a reputation as a creep.

Incorrectly assume a woman doesn’t want you, and you’re missing out on great sexual conquests right underneath your nose.

So let’s dive in.

Here are 5 hidden signs that a hot, younger woman secretly finds you attractive and wants to be with you.

To a woman, the “dad complex” comes from a desire for a mature partner.

She wants a stylish, confident, and put-together type of guy.

She’s done with dudes with roommates and unframed beer posters.

She’s been with the jock, the sensitive guy, the safe and handsome guy.

Now she wants a real man. 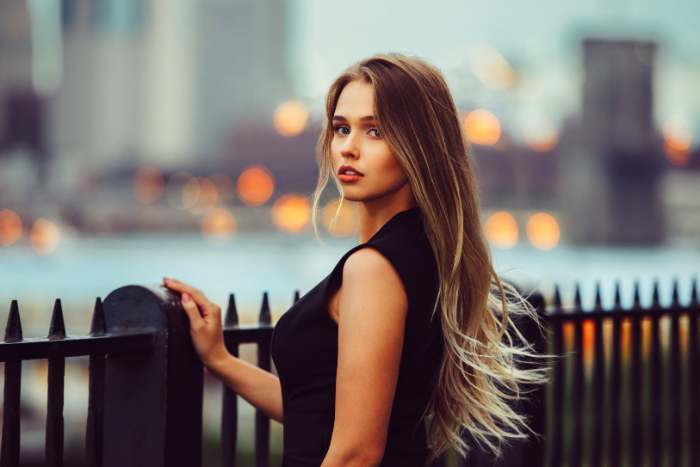 How to Attract Younger Women Sign #1: She Talks About Her Peers’ Immaturity

Does she bring up how immature her friends are around you?

Does she talk about how hopeless her dating prospects are because guys her age are “just so immature”?

This is nearly a sure-fire way to tell she’s interested in you.

Once you see this… you’re well on your way to knowing how to attract younger women.

How to Attract Younger Women Sign #2: Smiling and Laughing

When a woman is attracted to you, it will excite her.

That excitement will translate into joy.

And that joy will make her smile big and bright and laugh when you speak.

All of your attempts to be clever, silly or to tease her will be successful.

To her, you’ll be the most interesting man in the world. 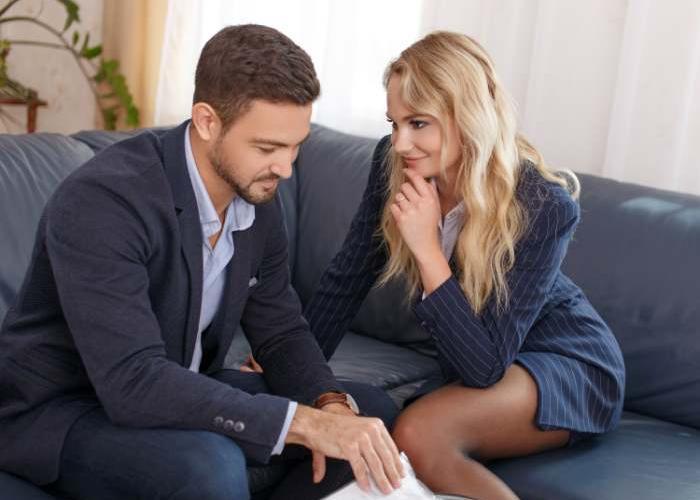 This usually comes in one or both of these two forms:

1. Frequent, quick glances in your direction.

When a woman is into you, she’ll want to look at you.

The psychology behind this is fairly straightforward.

We enjoy looking at and experiencing the things in life that we enjoy.

Think about your childhood when you would get infatuated with a new toy or piece of sports equipment and all you wanted to do all day every day was to play with it.

Similarly, when a woman finds you attractive, you’ll be the only thing she’ll want to look at. 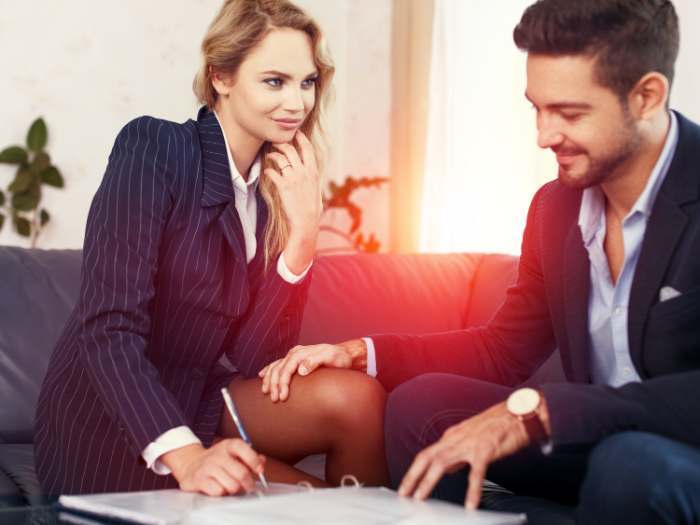 This is one of the most well-known signs of attraction from women, which is obvious from how frequently you can notice it in movies.

But until you explicitly learn about it, it can be difficult to notice in the moment.

If a girl thinks you’re hot, she will often touch you — especially when you make her laugh.

This will usually appear innocent.

Squeezing your knee quickly as you sit across from each other.

Similarly, it has been shown that women who are displaying sexual interest will also touch themselves (no, not like that).

These two ways are the most common:

1. She will run her fingers through her hair.

2. Or lick her lips softly while looking at you.

How to Attract Younger Women Sign #5: Body Language and Posture

There are a number of subtle body language signals that showcase that a woman is sexually interested in you.

These include standing up straight with erect posture, shoulders back and chest out.

She does this to accentuate her curves.

Another more subtle sign is pointing her feet towards you.

This one is important, because most people are not consciously aware of what they’re doing with their feet.

If her feet are pointing towards you, she is probably interested in you and the experience of being with you.

If her feet are turned away from you or are curled tight to her body, she is probably disinterested or feels uncomfortable, respectably. 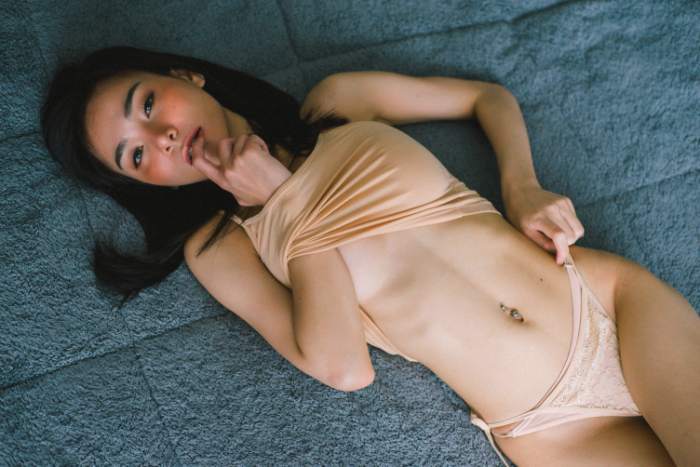 1) Talking about how other men are immature

2) Smiling at you often

3) Laughing at your jokes

4) Looking at you often and making lots of eye contact

6) Running her fingers through her hair often

7) Licking her lips when talking to you

8) Standing up straight with shoulders back and chest out

9) Turning her feet towards you

An isolated signal of interest from a woman does NOT automatically mean that she wants you sexually.

One clue pointing at a suspect does not make them guilty.

But a few clues in combination are certainly suspicious.

And at a certain point, you’d be a fool not to bring the perp in for questioning.

Remember what we said earlier about coming across like a total creep?

So, how should you proceed?

Joseph Urgo, a Chicago-area attorney answered a similar question on Quora, and I believe he’s on point.

“There are ways for you to respond to her ‘strong signals’ in equal measure in order to probe her intentions. Do that,” Stephen says.

“Dance the dance to the music she’s playing…. She knows what signals she’s sending.”

In other words, respond to her signals of interest in kind and see what happens.

If she gives you prolonged eye contact — match her gaze.

If she smiles at you all the time — flirtatiously smile back and give her a wink.

Play her game — and win. 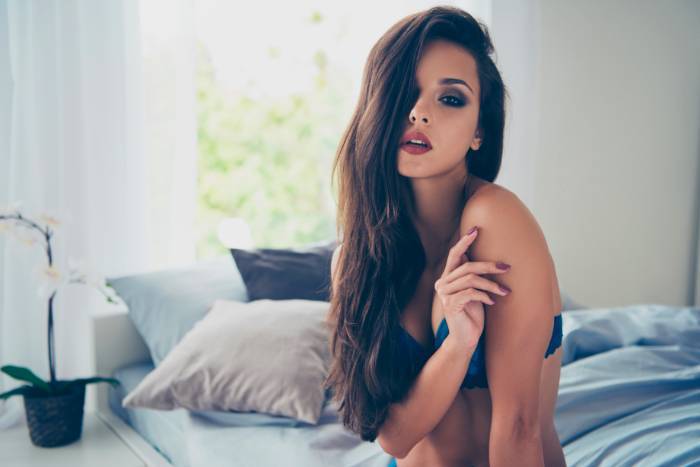 “But What If I’m Afraid of Getting Rejected?”

Look, as men you and I have to take chances.

I get that.–I really do.

But you know what happens to guys who never try?

They die as failures.

Never try to increase your income or start a business for fear of failure and you’ll die poor or powerless or both.

Never try to get the women you want in life for fear of rejection and you’ll die alone.

I’m here to help you put your best foot forward and attract the hot young women that you want to sleep with.

In this video, my friend Craig is going to show you how to detect which girls are DTF so you never embarrass yourself getting rejected ever again.

Fair warning: this video is controversial and contains footage that was banned from TV for being too divisive.

But in it, you’ll discover the No “Game”, No Bullshit, No Rude Behavior, and No Rejection method for finding and f*cking a new girl every week.

You’ll suddenly realize all the signals you missed from other women.

You’ll discover how to get on-demand sex from any woman you want.

This is a proven method to getting faster, easier sex.

In fact, it’s so effective that Craig needs to blur his face in the video and hide his identity, because he was getting so many death threats from angry feminists.

So stop worrying about rejection and check out this video right now.

The only thing you’ll regret is that you didn’t do it sooner: