Alright, so you found yourself a girl and started flirting with her.

And now you want to see what she looks like naked — or you want to take your sexting sessions to the next level.

You want to know how to ask a girl for nudes.

There’s a personal aspect to receiving a hot naked pic from a sexy girl you know that’s way hotter than just seeing any naked chick on the internet.

So how do you ask for nudes?

Why Women Send You Nudes

In order to know how to get a girl to send you nudes, you first need to know why women send them in the first place.

How to Know the Right Time to Ask Girls For Nudes…

Rule #1… you do NOT just come out of nowhere and ask a girl for naked pictures.

Rule #2… and I can’t stress this enough…

Never, ever send unsolicited dick pics. I have absolutely no idea why guys think this is a smart move. It isn’t. Women have two reactions to UDPs: laughter or disgust.

Now that we’ve gotten through what not to do, let’s discuss what you should do.

The second (and better) time is if you’re sexting.

“Like a Hot Girl Delivery Service”: Simple “Text Trick” Gets Her to Come Straight Over For Sex…

How to Ask a Hot Girl to Send You Nude Pics

If this is a new girl you just started talking to, make sure that you’re being upfront and let her know you’re interested in her sexually. If she’s not sure whether you’re into her, she’s not going to shoot her shot with a nude.

There are two ways to ask for nudes.

From my experience, the easiest way to ask for nudes is to present her with a choice. It’s a matter of framing the decision in her mind.

Instead of “requesting” nudes, you’re just asking her if she wants to spice things up a little bit. It makes it more of a consensual thing than the one-way street of asking her to send you nudes.

If you’re sexting, you can say something like “Listen…you want to swap pics? Could be hot.”

The other option is to play it more subtle.

You might not get anything out of it, but it gives her the ability to send you unsolicited nudes (which, in my opinion, are way hotter).

Tell her you miss her body.

You want to reassure her and remind her how attractive you think she is.

Another subtle way is to tell her you’re in public while you’re sexting.

Quick story. I used to know this girl who would send me pictures of her tits all the time if she knew I was in a meeting at work.

Girls love the risky business and putting you in a position where you might open up a dirty picture in public. It has that “OMG I can’t believe you did that!” vibe to it. It’s fun.

For a lot more great tips, tricks, and step-by-step techniques to get hot girls… I highly recommend taking a look at this.

What to Do If She Says “No”

Like I said before, there are a million legitimate reasons why a girl might not feel comfortable sending you naked pics.

Maybe her ex leaked photos of her online. Maybe she’s super conservative. Maybe she just doesn’t trust you yet.

If she says no, she very well may still be sexually attracted to you. So don’t get discouraged.

Also, avoid acting like you’re bartering. If she says no to sending nudes, don’t tell her you’re going to cut her off from sexting or something. This just makes you seem like a cruel jackass.

So if she says no, just respect that.

It will make you seem like a much more mature guy than her previous boyfriends who would probably beg and plead in the same scenario.

And trust me, women LOVE a mature guy with self restraint.

Actually, now that I think of it… respecting her decision and having the self-restraint to leave it at that might just push her over the edge and get you an unsolicited nude after all. 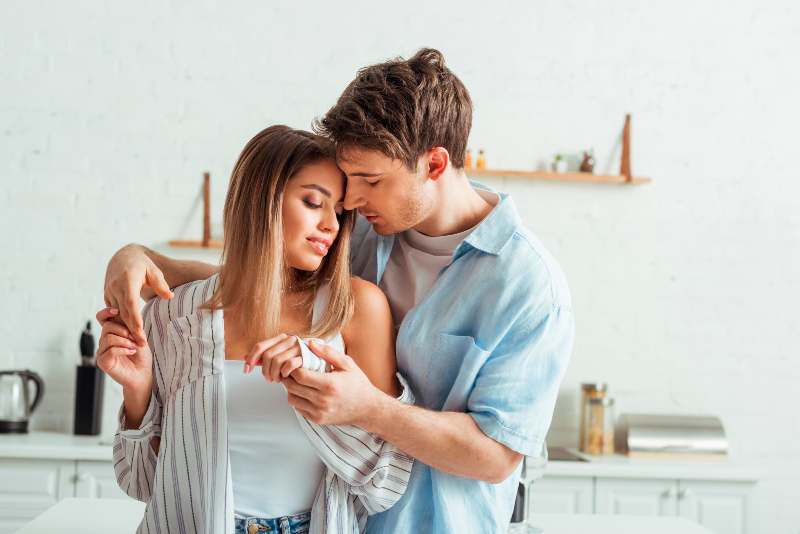 How to Go From Nude Pics to Banging Her

Sexting and getting some hot nudes are one thing, but your ultimate goal should be to get her over to your place naked in your bed.

If you want to make that happen, listen up.

My friend Glenn is an absolute guru when it comes to texting women.

Check out his article for copy/paste texts you can send her to help you cross the finish line.

So, go read Glenn’s article right now. Bookmark it. And copy/paste these texts into your arsenal.

You won’t regret it: