How to Talk to Girls in Public (& Get Laid More Often)

There are two reasons you probably don’t ask out as many women as you want.

Or you don’t know how.

While all women are different, there are things you should always do if you want to know how to talk to girls.

Fortunately, it’s not that complicated.

Here is a step-by-step way to approach and talk to women in public.

First, a Story About My Buddy Joe…

If you asked him to piss in a cup it’d come out as pure Maker’s Mark spiked with testosterone.

So when we were exchanging stories of hot girls we’d hooked up with, and comparing notes a while back… I was interested to see what was working well for him.

He told me about this tight little chick he chatted up at a bar one night.

She seemed into him… so about 15 minutes into the conversation… he leaned in and whispered something into her ear.

Before he knew what was happening… she was literally dragging him to the bathroom to give him a hummer!

But it goes to show you that confidence is 99% of the game.

If you go into this with confidence, like Joe did… you can get away with saying some really dumb sh*t… and have it come off as sexy and charming.

Step One: Know the Right Time

Before you approach a woman, make sure that she WANTS to be approached.

This the #1 mistake guys make when they talk to women.

Now, you want to look for signals of openness and avoid signals she’s closed up shop.

In a nutshell, you want to look for a girl who appears open to conversation in a good mood, and seems to have some interest in talking to you. 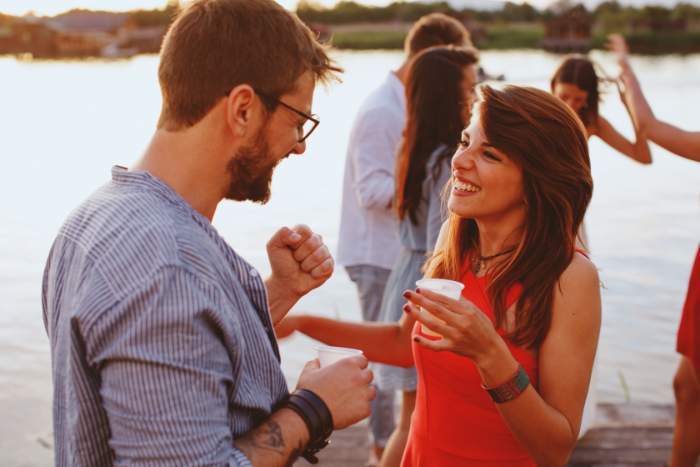 Before you walk over, try to make eye contact and get her to meet your gaze.

Just shoot glances at her to let her know you’re paying attention to her.

She’ll notice and return it if she wants you to talk to her.

Once she catches your gaze, smile.

The smile should be subtle, but playful.

It’s the moment of truth.

When you approach a woman and make that immediate first impression, that’s basically the make or break moment.

She’ll either show interest and leave the door open to you to start a conversation.

She’ll be annoyed, uncomfortable, and just want you to go away.

1. Approach from the side.

Women are more vulnerable than men, so they’re more risk-averse with strangers.

Approaching directly from the front or back will put her on high alert.

Approaching from the side seems more chill and less pushy.

2. Accept rejection as a possibility.

It’s a cliche that J.K. Rowling got denied by like 40 publishers or whatever with Harry Potter, obviously one of the most successful book series of all time.

But this is so important to understand.

So, accept rejection as a possibility and realize it’s not the end of the world.

“Man, that’s awesome I had the balls to talk to that girl! The next one will work out.”

Look at it as a positive.

Last but not least, your body language is super important.

Stand up straight with your shoulders back.

And look confident and happy.

Women don’t like complainers or whiners, and your body language should showcase to her that you’re in control of and satisfied with your life.

Exclusive: THIS Kind of Body Language Makes Her Wet For You…

1. Let her know why you’re talking to her (if a stranger comes up to you out of the blue, I’m assuming you’d like to know why).

2. Let her know she can trust you.

3. Give her a reason to want to continue talking to you.

Lots of places will try to give you funny lines, pick-up lines, or silly ice-breakers.

But, frankly I think your best bet is to just act natural and confident.

Being authentic and avoiding pre-planned lines will make you come across like a normal dude she can trust.

There are two different approaches that you can try out.

Your “in” is the reason you wanted to talk to this person.

This style of opening a conversation accomplishes our three goals for an opening line.

It lets her know why you’re talking to her.

Because you didn’t immediately ask her out or feed her some cheesy line, it shows you’re probably trustworthy.

And it’s an easy, no-stress way to start a conversation that puts her at ease and will likely make her interested in continuing a conversation with you.

My mentor, Craig Miller, has a really great conversation starter he uses over at Gotham Club (I’d highly recommend it).

The second style is “the walkaway.”

This is a huge power move if you pull it off correctly.

In business, walking away is one of the best negotiating tactics ever.

It shows that you have big balls because apparently you don’t give a f*ck.

And it makes the other person afraid the whole deal will fall apart.

Now, when it comes to women, “the walkaway” shows some serious alpha male confidence.

Here’s how this would go down in a bar scenario.

This puts the ball in her court.

It lets her know you’re not a stalker because you’re giving her an obvious way out.

If she comes over, you know for sure she wants to talk to you, so you’ll get even more confidence.

Step Five: Getting Her Number

I’m going to keep this brief, because it doesn’t need to be complicated.

To get a girl’s number after you’ve been talking to her for a while, just ask.

Once it seems like the conversation is coming to a close, just say “so I think you’re cute and super interesting and I’d like to see you again if you’d like. Could I have your number?”

A lot of guys try to do way too much when they get a girl’s number:

-Try to kiss her the first date…

-Set up a second date…

At each step… she can stop responding… she could’ve found a guy she’s more interested in… or she could get busy with work or life.

That’s why I’m a huge fan of one masterful creation of my mentor, the legendary Glenn P. (You might know him from The Game by Neil Strauss):

1) Get the girl’s number (using the tips above)

2) Send her one of these 5 powerful texts designed, tried, and proven by Glenn to make her come over for sex.

…delivers a hot girl right to your door, like Postmates or DoorDash…

…and it lets you “hook” her by having sex. Once she’s been f**ked by you, she’s way less likely to ghost or go on to a different guy since you’ve broken the “sex barrier.”

But it all starts with these 5 ingenious texts from Glenn–check them out and try them on a hot girl you’re into as soon as tonight:

P.S. – Oh yeah about Joe… you know what he said to the tight blonde chick that made her blow him in the john? “You know, my mother would be SO disappointed in me right now if she knew what I wanted to do to you…” Nothing fancy… and that legit got the girl to giggle for a sec… then she blew him in the bathroom at the bar. Well these texts are WAY better than that line… so use them if you want to have sex with the girl that same night, since they’re way more effective.