How to Keep Your Girlfriend Happy.

Women have always been a mystery, a puzzle for us men, which we can’t seem to figure out how to solve. And what they want is even more mysterious, as they are so indecisive in figuring what they want themselves.

They have been biologically programmed to act and be this way. It’s not their fault that they’re a puzzle, actually. In this article you will learn how to keep girlfriend happy so that she can’t resist you.

One thing I would like to make clear is that I am not going to suggest that you show her more affection and completely drool over her to make her happy [a lot of fake experts suggest that].

Or even worse, give her expensive gifts to keep her happy.

If she’s with you for gifts or cash,  then you better leave her, as she’s using you and will probably leave you for a man who’ll give her more gifts.

Keep in mind that the stuffs that you learn here are only as good as the actions that you take. You need to put into action whatever you’re going to learn, or reading this will be a complete waste of your time.

Attraction is not a choice, it’s psychological, it’s involuntary. The reason you have a girlfriend at the first place is because she is attracted to you. And the no.1 reason to make her to stay happy is to keep her attracted to you.

Don’t let the attraction fade or else your relationship will be in a limbo. [ not lambo..;]

Now, your girlfriend was attracted to you initially because of the way you behaved, the way you treated her.

So if you want to keep her happy, you need to make sure that you continue doing that. Don’t slack, don’t sleep on that and don’t take your girlfriend for granted.

While you may be attracted to her physical features, she’s attracted to you because of the way you behave and how you treat her. 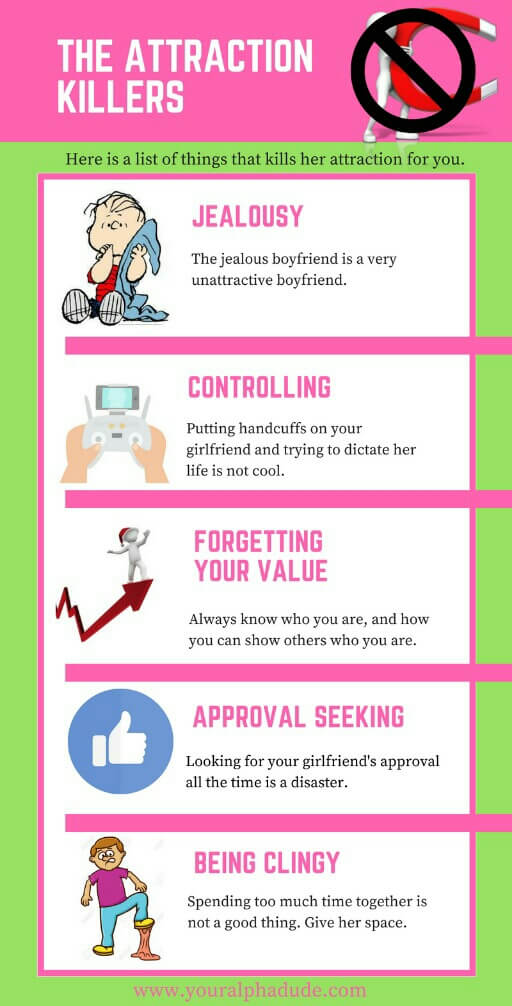 While trying to be a good boyfriend for her and taking care of her is very nice and sincere…  you can’t keep her attracted to you forever by just doing that. Woman don’t want a man whose sole purpose in life is to please her.

You need to do what’s expected of every man the moment they’re born.

That is to penetrate this world, with their will, their passion and being victorious and successful in life.

Men without purpose and a strong vision for life are very unattractive.

You need to become a man on a mission, and then she’ll also become fully invested in you and your purpose.

You need to become dominant in your relationship and about your purpose. Do everything with boldness.

If you do that… she’ll get wet for you. The moment she notices that her man is a fierce and an audacious man who wants to do something BIG and great in this world is the moment you hook her for life.

Don’t be timid or shy. That’s a huge NO.

Push – pull is a simple theory which means the contraction and relaxation of tension. You create tension and then you release it. It revolves around the fact that we want what we can’t have. Yes, you read it right. Even after being in the relationship you can’t be fully sold in the relationship.

This is how female psychology works. Women always want something to work on. They want a work in progress.

If they feel like they have seen everything with you and explored all the horizons with you then they’ll move on.

So, what you need to do? Keep creating more layers of yourself for her to uncover. Always let her feel that there’s more to you that she doesn’t know.

Keep Her Guessing... THIS Is The Biggest “Pull” In the Bedroom…

Always be a mystery no matter how long you’ve been in a relationship.

By “pushing” and “pulling” constantly, you’ll give her new layers to uncover. Think of it like giving her new puzzles to figure out every day.

But don’t over do it. Remember push and pull. From time to time. Alternatively.

Sexual tension is created when there is a mix of the two and it makes her crazy for you and head over heels in love with you.

If you play your cards right here, then she’ll forever stick to you and love you. Find a right balance and always keep her in a constant flux.

For more on mastering this art. I recommend you to check out my step-by-step article on how to flirty with a girl without being a creep.

➣➣ Click here to reveal the secrets of flirting.

Women love being and feeling feminine and for that to happen they need to be in the presence of a masculine man. This is more important than anything you’re going to do that will make her happy.

You need to make her feel like a woman, especially in the presence of a masculine dominant man, who knows his way, goes his way and shows his way to others.

The more you make her feel feminine by being masculine, the happier she’ll be with you and even make efforts herself to keep you happy.

Nowadays, one of the biggest relationship killers is men being wussies. Most men don’t know how to take care of life and their women. They’ve become indecisive sadasses.

There needs to be polarity between you and your woman. Trust me, this is going to be the game changer in your relationship with your girlfriend.

But, don’t force her into anything. You just do your role, that is be a masculine, she’ll slowly start doing what she is genetically and biologically designed to be, i.e. be a female, a feminine.

By the way being masculine means being mature, being centered and being decisive. Don’t take masculinity for being a**hole. 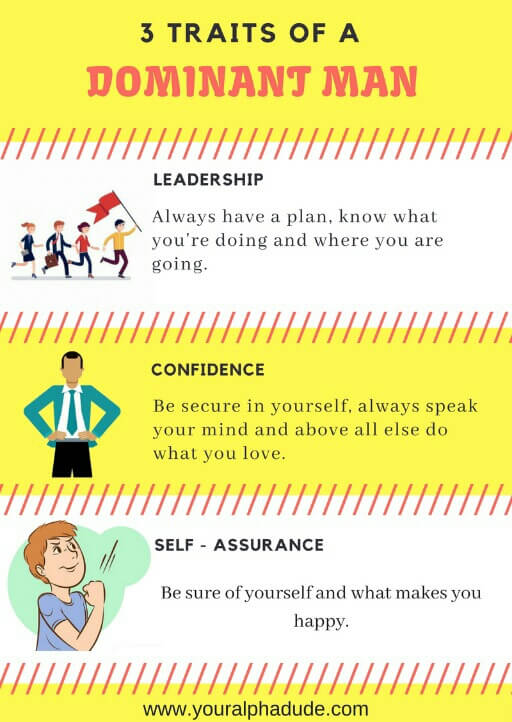 Women like being led, especially by a strong man who knows where he’s going. I’m not trying to be misogynistic here, but this is the truth.

A man who knows where he is going is a pleasant man to hang around,  especially if he’s leading others on his way as well.

That’s one of the most attractive traits of a man and one of his strongest traits to keep his woman happy.

Now, I’m not saying that you should go on a world changing mission just to please your woman… but in general just lead in the relationship.

Some examples of this include:

…and at what time.

If you want to be a bit dominant then tell her what to wear, she’ll like that.

Knowing what you want is very, very attractive for a woman. Being decisive shows the woman that she can trust you and let you handle any and all situations on your own.

Now you don’t have to be right all the time, no that’s not important, what’s important is the aura of confidence that you radiate when you come up with a decision. That’s way more important than being right.

Yup, that’s right just do it, don’t think too much and sweat over petty issues. Whatever, they may be, just don’t waste your time over those stuffs, be decisive and lead her. 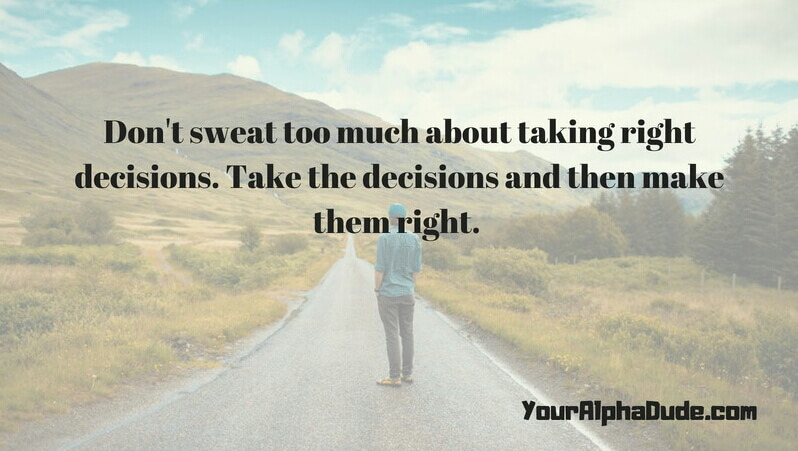 This is so very important. Most of the times what happens in a relationship is that we men get obsessed over women.

We will continuously ping them in order to get a response out of them without thinking what may be happening in their lives. Now let me quote again –

” Too much of anything is bad.”

Yes, you read it correct. Even when it comes to your relationship, if you’re spending too much time with her and showing too much love, then that is not healthy. Rather that’s unhealthy. You need to give her space and be busy with your own life.

Spending time apart is a very important aspect for a happy and healthy relationship. The feeling of excitement and delight will quickly vanish with too much exposure with each other.

You need to keep that in mind. Spending too much time can be harmful and detrimental for a long term relationship. You both will grow tired with each other, not grow old together.

Your girlfriend doesn’t want to be glued to you all the time, period. This doesn’t mean that she doesn’t love you and all that, it just needs that she has other things to do in her life which she enjoys doing, and if you’re a good boyfriend and want to see her happy then you need to understand that and give her space.

Tell me, would you rather, spend a lot of boring, unwanted, unpleasant time with her, or would you spend a quality, excitement-filled time where both are you are completely drooling over each other?

In this article i shared with you on how you can keep your girlfriend happy. I made you understand that it’s not your gifts or undivided attention that she wants, but she wants you to be a masculine man who behaves nicely and also takes care of her.

You need to always remember that since attraction is involuntary , so if it can be created without her conscious choice, it can also be passed, from you to someone else. This is why i focused so hard on attraction throughout this article. Because it’s probably most important part of her being with and being happy.

She needs to always feel attracted to you and feel this sensation, this tinge about you which no one else can give her.

And also make sure that you don’t over expose yourself too much as that can also kill attraction as she will feel there is nothing more about you that she needs to know and figure out.

Now here’s something that’s really important if you’re in a long-term relationship… it’s kind of a “dirty secret” that few guys know:

How to Be More Dominant In Bed With Your Girlfriend…

Here’s the truth: if you’re naturally a little more “shy,” “introverted,” or even “submissive”…

Then unless you find a woman who’s super-dominant… your girlfriend is probably already secretly begging you to be more dominant!

So if that’s the case… try these 3 Dominant Sex Moves.

(Which is what pretty much every girl secretly wants anyway)…

And I also have a great lost secret that will make her THINK you’re much bigger “down there” too.

To instantly see how to be more dominant in bed… and soak your girlfriend’s panties like you did when you first met… check it out now: